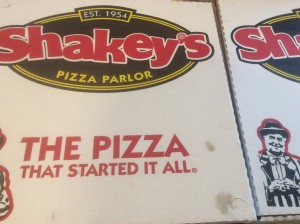 The good, the bad, and the ugly.

Shakey’s Pizza was once the largest pizza chain in the world at 400 + stores. The rights in the U.S. are now owned by Jacmar industries, although the chain is now substantially smaller.
Shakey’s was founded by Sherwood “Shakey” Johnson and Big Ed Plummer in 1954. Johnson had contracted malaria while serving in the U.S. Navy during WW2, leaving him with a case of the shakes, earning him the nickname Shakey from his fellow sailors, a name he bestowed on his restaurant, Shakey’s.
Shakey opened a beer and jazz joint, and with profits from his first few nights of sales bought pizza fixings for his guests. This begat the birth of a legend.

In the late 50’s pizza was still very much an ethnic thing, a novelty, a treat, as pizza had not yet “mainstreamed” with the American public. It was basically uncharted waters, or territory, for the early pizza joints, or parlors as Shakey’s became known. Even today some people refer to sit down pizza restaurants as pizza parlors, a weird mix of words that connects to Mr. Johnson.

On 4-25-2015 I had to drive up some miles on my vehicle after fixing an emission problem and resetting the inboard computer before taking my ride in for a smog check. I decided to drive to the Moreno Valley Shakey’s Pizza and grab a couple pizzas, simply to have a destination, and to have some nostalgia. See, I grew up on Shakey’s Pizza (was one of my faves), Me & Ed’s pizza, Straw Hat Pizza, and to a much smaller extent Pizza Hut. Shakey’s and Straw Hat were my top two back in the day. We didn’t get much pizza back then, mostly because it was pricey, and because my folks were more meat and potato eating folks, and mom would NOT step foot in a pizza “parlor,” the very idea was as repugnant to her as walking into a burlesque theater. But now and again we ate pizza…

I remember one week my mom was out of town on a travel agent junket and my step dad got home from work and asked what I wanted for dinner. Pizza, of course! Hell, given a choice that was a given, that or Mc Donald’s. So off to Shakey’s we went. Not until right now did I realize that my step dad had a hard day, cooking wasn’t on the to do list, and that he and I would have some one on one quality time.
He had a beer, I had root beer, and we ate a large pepperoni and black olive pizza, sitting at the wood stained and urethane covered picnic benches they had, watching old Laurel and Hardy movies. There was also a large pipe organ with all sorts of air activated instrument’s attached to it, many of which sat in a glassed-in room to the right, but this night it was all Laurel and Hardy. What a fantastic memory.

So what do I think of the modern-day Shakey’s? It’s been decades since I stepped foot in one, but surprisingly it felt like home, for a couple of reasons, one, it’s Shaky’s, and 2 I worked in the pizza field for a number of years. One company I worked for made GREAT pizza, relegated Shaky’s product to a hint, a suggestion of real pizza, the other company blasted past Shakey’s in size and reputation very quickly. 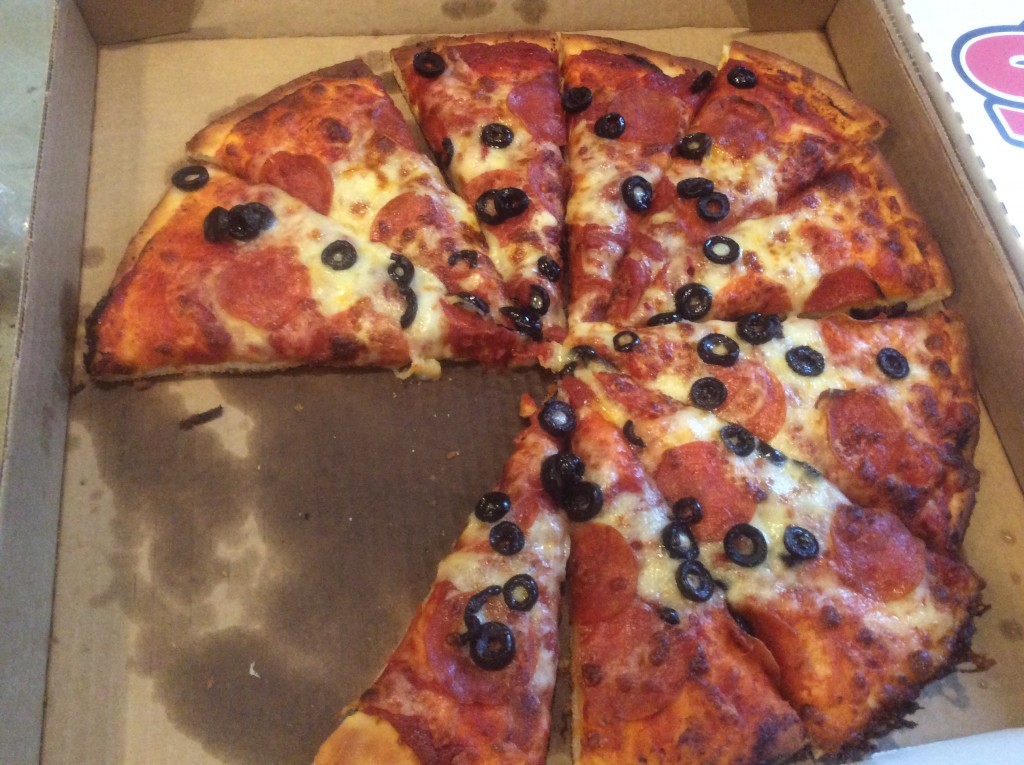 This outlet is homey, nicely laid out, very large (too large), with a great assortment of games, a fair number of large screen T.V.s, an interesting layout with some raised seating. It’s nicely decorated, paying homage to the past, while clearly of our time now.
The food is much as I remember it, (more on that later).
The workers were 99% inoffensive (more on that later).
The buffet was laid out and it looked good and interesting, maybe not entirely inviting though.
This is a place I would (and do plan to) take the family, especially the granddaughter.
The wait for 2 to go pizzas was average, 20 minutes. Interestingly they were not busy, so my pizzas should have taken 2 minutes plus oven time.
The game room is awesome. As the parking pace curbs say, “This parking reserved for fun people.” Accurate to a point.
Gob loads of seating. 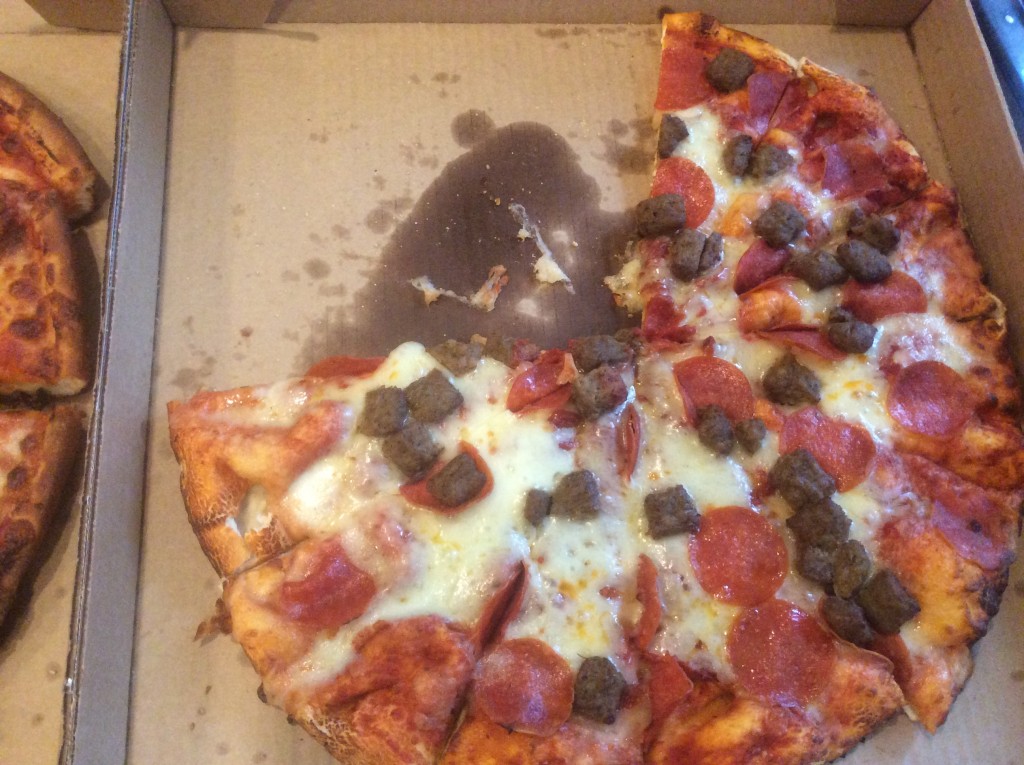 The pizza is familiar, and you know, to me it has charm because this pizza defined pizza for me growing up, but really, the pizza really isn’t all that good. Now just down the road, less that 1/2 mile west, is a Chuck E. Cheese pizza joint, one of the companies that almost killed Shakey’s, and while I have never eaten C.E.C.’s pizza, I have seen and smelled it. It is WAY overpriced, and not good at all, or so I’m told. Shakey’s is far and away better pizza, but that’s not saying much. Honestly, DiGiorno pizza is better pizza than Shakey’s. And while C.E.C.’s pizza is expensive, but nasty, Shakey’s is decent, but also hideously expensive. Two large (15″) two topping pizza’s was $42.00 and some change. Over priced to the point of thievery! Little Caesar’s is WAY cheaper, and, well, it too is better pizza. To look at it another way, Round Table pizza, a few miles east is comparable in price to Shakey’s and about 2 times better tasting.
The dough is not as yeasty as in the past. The sauce is as tasteless as Costco pizza (Costco has better pizza btw), the amount of cheese (real whole milk mozzarella) is adequate, the pepperoni is adequate in coverage and flavor, the black olives are good domestic olives, but the sausage has GOT TO GO!!!
Shakey’s now use conveyor ovens, and say what you like about efficiency, these ovens do change the flavor slightly by drying the product out.
The pizza toppings, for the price are too low in quantity. Sizes are too, but the toppings, cheese is about 10% too light, pepperoni is about 15% too light, olives are about 10% too light, ands sausage is about right. But for the price the toppings are about 25% too light.
On that sausage, I remember the products being similar decades ago, looking a lot like the head of a Major Matt Mason doll (yeah, showing my age here). Looks similar, but…
Pre-Cooked Pellet-like sausage is a Crime Against Humanity!!! Note I did not call it Italian Sausage, because the pre-cooked little pillow looking “sausage” they use, like all pre-cooked sausages, does NOT taste anything like Italian sausage. At all.
No seating for take out orders, no waiting area.
I did not see anyone I could identify as a manager.

The Ugly.
Prices aside, and the prices are ugly, there isn’t much to say here. Some things I noticed as a professional manager. At least 6 crew were on duty when I walked it, probably more like 8 or 10, but 6 I for sure saw, and for a slow time (only one other customer was in the building for the first 19.5 minutes I was in there, and two people walked in as I was leaving), it appears the high prices may be to compensate for an exorbitant labor percentage. Even a sit down and take out like Shakey’s ought to be in the range of about 18 to 20% labor cost, management included, but not at the staffing levels I saw. At this time they were clearly running in deficit numbers. 2 of the kids on duty were milling about, the rest were moving slowly. This is proven in the 20 minute wait.
Also one girl was in the back kitchen, clearly visible from the order/waiting area, was wolfing food. This is a huge pet peeve. Eat, absolutely, if that is the policy. Some restaurants offer a meal free, or at a reduced rate, during ones shift, so by all means eat. However I’m having a hard time believing that having been open less than an hour someone would have a break time. More to the point, never, ever, EVER eat where a customer can see you, whether you’re gobbling food, as in this case, or nibbling. You see, food customers are an odd bunch, and some will make the assumption that you are eating someone else’s food, and others, like me, simply find it rude. Eat if you must and it’s allowed, but always out of customer sight.
Lastly, a pasta pot was on the fire in the back left of the front kitchen, and this filthy looking thing appears to be maybe of civil war vintage. Nope, not gonna eat pasta here any time soon.  Keep it clean!

If you want to spend too much for okay pizza, and have a lot of people, and/or have kids but want better pizza than that cheese’s place, love Americana, and want to eat in a clean, iconic restaurant, Shakey’s rocks.

See, the huge square footage of the restaurants and higher than normal labor (most places like this on a Saturday morning would have about 3 employees on duty) make the high prices a necessity. Thankfully over all the years the product has not been dumbed down any, or so it seems. However, operator, you have to control your controllable costs. Never assume you can line these up by raising prices or cheapening the product.