Home Articles Grow Your Own Food

Grow Your Own Food 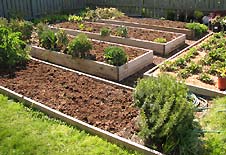 Grow your own food – not my garden

I have always believed in growing your own food, recycling, taking good care of nature. I
think taking responsibility for the home we all share, Earth, is important.
I also believe that GMO’s, while they maybe not heinous, are a pretty bad idea, that tinkering with the original genes of plants and animals that humanity has relied on forever is a terrible idea.

I’ve read that the wheat we’re all using these days is a far cry from that which our grandparents enjoyed, and is modified for the sake of producing more. I also read that getting original wheat is next to, if not entirely, impossible. However only folks with huge lots to plant can really grow their own wheat, which makes things dicey for the grow your own campaign.

I think we humans need to, as best we can, go back a bit to our original agricultural roots, utilize what yards, planters, space we can to augment our lives, our diets with real, organic, wholesome food, denying the purveyors of frankenfood our dollars and cents by using our good sense.

I have spent the last couple years trying to do just that, with little success. My winter plantings were started in the house and nearly all the plants were killed by the cat. Last year I plated quite a bit with my Granddaughter, and while the flowers did pretty well, the other stuff was hit and miss. Small pear-cherry tomatoes lagged and goofed around for months before they literally took off like banshees. First harvest from 1 plant was 23 tomatoes, and over 100 from the second harvest. The regular tomatoes did like wise, and grew even slower than the small ones, then blasted off for no reason I can discern. Oregano has done fantastic, and sweet basil did very well in my lousy clay like soil.

On the basil, all the plans I grew, whether from seed or from small plats from the Home Depot, grew to exactly the same size and stopped, yielded good leaves, then died off with the first frost. However, I bought one of those grocery store packets of fresh basil that are hydroponically grown, took the plant to an event, forgot about it in the ice chest nearly totally wilting the plant. I felt badly for the plant, mostly because I’m weird like that, and planted it in the dirt in my garden. The store bought, never intended to be planted sweet basil was saved and thrived! It grew to twice the size of my other plants, and while the frost killed the other basil plants and seemingly the saved plant, the saved plant regenerated after the frosts! Crazy genetics? I don’t know, but it’s alive today. Much smaller, but alive. Interestingly that plant also has the best tasting yield.