Justin Being Justin in Black and White 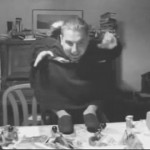 A black and white version of Justin, or Justin Being Justin BW, he being a part of Claranormal, doing the little person dance at our house in Claremont. This was in about 2008, the original, the BW version was created a few years later. He is family even if he isn’t actually family, so this is going into the family video section. 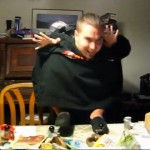 This was shot by us about 6.5 to 7 years ago as Claranormal’s Justin was visiting the Claremont house. He of course is a funny guy, and he decided to put on a show, doing a little person dance on the table. This is going into our family section because Justin is family after all, even if he is a freak 😀 There are also two other version of this being uploaded, a black and white and an olde tyme version.

This is a video that’s from maybe 2.5 or 3 years ago as Zoey blows bubbles.  Little Z has always loved to sit at the kitchen island, and this time she had some watered down iced tea. She has always been partial to straws too, and finally discovered what we all do when we’re little, blowing bubbles. 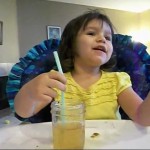 Still to this day we keep a stash of straws here for her just for her drinking pleasure, lol. I remember doing the bubbles thing with milk, and, oh wow, memory just came back, with those old style paper straws. Remember using those on a milk shake? Pure torture. 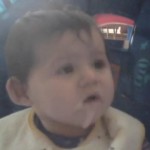 About 4 years ago I had my Vivitar night vision camera out, which shoots normal in light, but automatically goes to black and white night vision when there’s not enough light. Zoey was getting her first taste of frozen yogurt and I was filming it, but enough light got blocked at the critical “first taste/brain freeze” moment, which made it look weird. Z had become a video vampire, lol. That is all. This is simply a saved family video.

Welcome to the video Little Zoey Talks. This is a video I made of the grand daughter about 4 years ago in which we followed our usual meal ritual. I’d talk to her and she’d talk back in her baby talk. I added captions later. 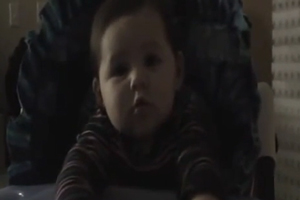 I wanted Z, from a young age, to know and understand that what she has to say is important, that people will listen to her and take time out to talk with her.  Yeah, well, that worked, now she talks pretty much all the time, lol, and I wouldn’t want it any other way. I remember growing up and my European elders, grandpa in particular, saying “Children are to be seen and not heard.” How offensive. Not for Z, she is to be heard. And you know what? Her school principal spent some time with her one day (nothing bad, we were
just late picking her up from school) and told us “In all my years doing this I have never seen a more articulate child. She’s special, and probably going to be some sort of public speaker.”
I have moved where this video is hosted from my YoureOn.net server to YouTube then imported the video in from there, but had trouble making the embed work. This would have sped up our server by not bogging it down, and reduce my internal storage. Lets face it, YouTube is forever.