So I’m at the store and all the requisite magazines/tabloids are on display, and while 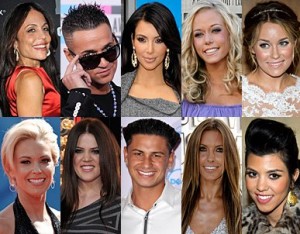 waiting I do what everybody does, I gaze at the covers. While doing so it strikes me that, a) Batboy no longer makes the front page (he has apparently disappeared) and b) I don’t recognize a single one of these “celebrities” they have on the covers.
I say to the checker girl that “I must be getting old. Who are these people?” She shrugs, “I don’t know, mostly reality TV celebrities, I think. You know, like the Kardashians.”
Ah, that explains it. I rarely watch TV, I don’t watch reality shows, and I couldn’t care less about the Kardashians or any of their ilk. To get the “person on the street”‘s opinion, and out of general curiosity I ask the girl what the Kardashians are famous for, exactly?
“Nothing. Absolutely nothing” comes the expected reply.
So on my way back to my home office, I’m thinking about that response, and what it really says about our society, our culture, the unabashed idolization of people for no good reason other than they are on the tube and have some money, who’s sole claim to fame is due to their having a TV show based on their oddball wealthy lives.
Beautiful? Well, I guess they’re okay, but I know so many people who are better looking physically, who lack that special “insane gene” that appears to pack their crazy baggage full of nutty drama. There are soldiers and law enforcement personnel of all genders and proclivities who warrant attention and idolization far more than these reality TV folks, but they simply and quietly go about their lives living in dignity.
So I guess my question is, what price for your dignity? For your integrity? For your life’s blood, toil and soul?
Do you yourself sell your valuable time consumed in the trivial lives of well heeled “reality” television personalities, and if so, why? What is the payback?
~~~~~~
2-22-15

About Mr. Jenner, I have to say, poor guy, living 60+ years as a man when deep inside he was, and wanted to be, a woman. Now think about this, he was an Olympic gold medalist decathlete, appeared for years on the cover of Wheaties as the ideal of male athleticism. How damned hard did that have to be for him? Or is it exposure to that K bunch that changed him? We’ll know in a few years if Kanye comes out as Kandy, I guess. I doubt it will happen, but perhaps it could.

Since writing the earlier piece, a friend told me about an article that was relevant in People magazine, and as loathe as I was to purchase such pap, I did buy a (expensive!) copy. The article I wanted was at the back, so I leafed through the whole damned magazine to find it, and on every page were examples of the above, stories and pictures of people I have never heard of. Has celebrity really become this cheap? This easy to attain?
Then I sit back and remember my own axiom: Celebrities, for the most part, are ordinary people trying to live ordinary lives under extraordinary circumstances. Cut them some slack.