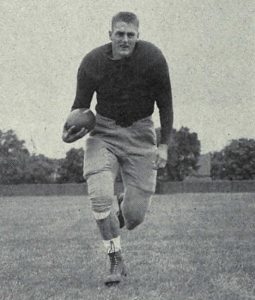 I grew up in the LA area, and as such I have many fond memories of Los Angeles Football, and by that I mean Los Angeles Rams football. I remember Rosie Greer, Roman Gabriel, Pat Haden (and his platooning with Ferragamo), I remember Youngblood, Dryer, all of them. I watched the games both live, in person (just a couple), and on television. I was raised on the Blue and Gold, and while there were my favorite team, there were others I enjoyed watching too. Although most of my faves have always been NFC teams, one exception is the Steelers, one AFC team I could sink my teeth into, the other being the Seahawks before they switched to the NFC. Beyond that the AFC has never held much interest in my mind, I don’t know why that is, it just is. I’ve just always favored NFC teams, and of course the Rams first. Cowboys probably second, the Bears (Walter Payton era) and Montana/Walsh era 49rs tied for third. I also got on the bandwagon when the USFL came to town, Steve Young and the LA Express, and as sad as the USFL was, it was a far cry better than what LA has now. 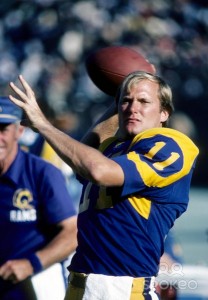 I followed the Rams in LA, and when they moved to the revamped Anaheim Stadium. I loved that they were closer to me, but at the same time I felt that they
really belonged in L.A., not Orange County. I also loved the enlarged Anaheim Stadium even if it was a weird configuration with an odd wall curvature in the area that would normally be behind home plate, and the goofy pull out bleachers in right center field. I even watched a couple California Surf soccer games there, as well as a couple CIF football championships. The Big A had grown, and grown up, yet at the same time I missed being able to sit in the stands and look out at the passing trains past the center field fence and
parking lot, and I missed the big A in center field, but it was all in the name of progress, and my Rams were right there.

Then the unthinkable happened, after a few years in Anaheim the Rams moved away. 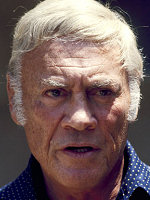 Actually it began before the Rams even made it to Orange County when the beloved owner, Carroll Rosenbloom, died. Bypass all the controversies therein, the fact is he had passed, and per his will 70% of the team passed to his wife Georgia, who later became Mrs. Frontiere. The move to Anaheim was planned out before Mr. Rosenbloom passed away, and proceeded as planned, but the rams would not be there forever, unfortunately. On Mr. Rosenbloom, he WAS the NFL, or more precisely, considered by many to be the father of the modern NFL in many ways. He helped forge the NFL /AFL merger, was in on the TV rights and revenue sharing at the beginning, he proved that the NFL and it’s teams could be run as a profitable business, whereas in the pre-Rosenbloom era, owning an NFL team was largely a status thing. You as an owner were a huge sports fan who happened to own a team. It may make some money, but it wasn’t huge business, not like today, and Mr. Rosenbloom was largely responsible for ushering in the NFL we see today. Carroll Rosenbloom was also known as a sharp, shrewd businessman whom one could do business with on a handshake, and know that a deal was a deal, and it was likely a square deal.

After the 1994 season, Mrs. Frontiere moved the Rams to her home town of St. Louis, Missouri. The NFL had tried to stop the move, but in the end commissioner Taglibue proved to be no match for Mrs. Frontiere. Frontiere received a great deal from St. Louis, who had been hard at work to get a team back in their city ever since the Cardinals had left, and had offered Frontiere huge enticements to further their goal. The LA area did not have the money, stomach, the votes, the DRIVE to spend a gazillion dollars to keep a team that, in recent years, had been nothing but a stinker. Los Angeles football was dead
too. At least Pro football.

LA fans are a fickle bunch, that is true.Yes, there are some sports fans in the LA area who will root for their team whether they are good, bad, or mediocre, (see Clippers, L.A) but they are far and away the minority. Unlike some areas of the country, whose fans adore their teams regardless of outcomes ’til the day they die’, we in the LA area love winners. Winner people, winner teams, winner films, and we generally don’t cotton to anything less. We are the land of promise, and the land of broken dreams. Look at Hollywood if you don’t know what I mean by that. We strive, we seek to excel, but we won’t suffer fools or failures.

Mrs. Frontiere knew this, she knew if she couldn’t produce a winner she’d be up a creek. She also knew that no matter if the Rams were successful or not she would not get money thrown at her, she knew that she would not get a new stadium built for her, and she knew the average Joe on the street had very little use for her, so her options were thin. “Win games and we’ll come, lose, and we won’t.” It had to be a daunting proposition. One other 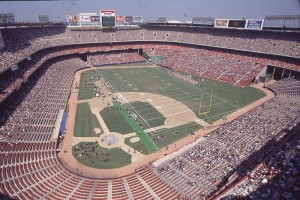 option was to hobble the team, ensure the fan base was eroded to such unreal, unheard of levels that the “other city” option

became a viable option. Get rid of the talent and say “It’s just too expensive to
keep Dickerson” when in reality it’s expensive NOT to, unless, of course,
there’s another ball in play. I can almost hear it. “Oh, the community, it isn’t
supportive of us! Look at our ticket sales, look at out concession sales, look at our lack of luxury boxes and places for ad placement, boo hoo hoo. Oh, and Paul (Tagliabue), the Rams moving isn’t such a bad thing for the NFL either. We didn’t get a new stadium and Carte Blanche, but let L.A. stew for a few years,
use the L.A. market as a carrot to get more stadiums built for other cities, it enriches the whole of the NFL.” Now I don’t know if any such words were ever uttered, but I wouldn’t be surprised if they were.

And off to St. Louis OUR team went. I swore off the Rams the very day they moved, and as the years passed I swore off the NFL. 20 YEARS guys? Really? A club of billionaires and you can’t get a team into the Los Angeles area? Going on 21 years without an NFL team? In the NATIONS 2ND LARGEST MARKET? Yet the SAME year both the Rams and Raiders left the LA area you awarded teams to other areas with smaller markets? Jacksonville Jaguars – 1995, Carolina Panthers – 1995. The following year, Baltimore Ravens – 1996, and 7 (YES SEVEN) years later, 2002, you award Houston with the Texans a mere 5 (FIVE!) years after the Oilers bailed for Nashville Tennessee? Nothing against any of those fine cities, and I wholeheartedly mean that, but what were you thinking, NFL? L.A., shunned again. Ridiculous. If someone were to write a book detailing this chain of events as a work of fiction, no publisher worth a hoot would touch it. “Too unbelievable.” 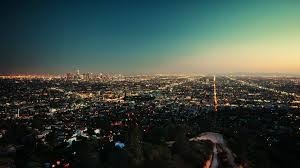 See, the L.A. market is huge, much larger than any mentioned above, but the problems for LA were that nobody was willing to spend the money for a
stadium, as that would mean more taxes for an already overtaxed populace, and the L.A. football fans continued to tune in to the games on TV. The NFL had it’s cake and was able to eat it too. “So there’s no team in the Los Angeles area, so what, they still watch games on TV and bring in a ton of advertising dollars, so screw them.” Have I got it about right, fellas? Had L.A. viewers shut their TVs off en masse for the games, I’ll bet we would have had a team in 5 years or less.

You see, we would have gladly settled for an expansion team. Los Angeles Football would have, once again, been a reality. It would have been OUR team, not someone else’s stolen pride and stolen legacy, but our team.

Now to be fair I have to mention that other team, you know, the one that toddled back home where they belonged in 1995, the Raiders. Al Davis was a maverick, and did what he felt was best for his team. He didn’t sandbag his team’s efforts, he played a smart game and still came up short on the whole stadium deal, woes his son is still dealing with as his team seeks a new stadium of its own. I don’t blame Davis one bit zipping his team back to Oakland, it’s where they were from, it was home, and in my opinion, it is where they belonged. Still, to this day there’s a relatively small cadre of Raider fans in the LA area in comparison to folks who would like to see the Rams back in L.A. 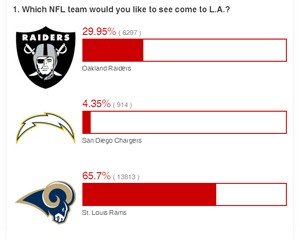 The Los Angeles Times recently ran an online poll asking “What NFL team would you like to see in Los Angeles?” Subtitle and story asked which of three possible teams would be the best fit for the region. The options were listed in this order, left to right 1) Raiders 2) Chargers 3) Rams. The vote? In the first 24 hours it was: Rams 65.7% (13813 votes for)
Raiders 29.95% (6297 votes for)
Chargers 4.35% (914 votes for)
The Raiders, Oakland can keep them, they are Oakland’s team. The Chargers,

we clearly don’t want them. I certainly don’t. They have belonged to, and in, San Diego since 1961, after spending their first season in L.A. We don’t want someone else’s team. As stated above, we don’t want another teams stolen pride and legacy. We want our Los Angeles Football Rams back.

Mr. Kroenke seems to be a businessman in the ilk of Carroll Rosenbloom, worthy of the mantle the latter once carried. He seems to make smart calls and reaps the rewards, so I very much hope that it is in his best interest, the Rams best interest, and L.A.’s best interest to bring back the Rams to L.A. But if he does I’d caution him with words Al Davis used to say to his Raiders:
“Just win baby.”